Fonthill and District Kinsmen
We had a home show last April at the Pelham Arena on Haist Street. The home show is a huge success every year thanks to the hardworking participation of our club. We also have the Kinettes who help us with the event for the weekend and set up on the Wednesday. A thank you to LM Dave Ripley for organizing the application forms for our booth rentals. The event has been held annually since 1996.

Our club has recently welcomed a new member, Kurtis Bronn on September 18. Our current membership is 24 members.

Our club recently held a craft show at Centennial High School in Welland. The event raises money towards Pathstone Mental Health, Childrens Safety Village and Welland Special Olympics. The event is a success thanks to our chairman Kin Dave Kuckyt and all the Kinsmen and Kinettes that make the event run smoothly. The Kinsmen took over the event in 2009 from Women’s Place.

Our club is still going strong after 67 years of its founding.

Brendan Young
President of the Fonthill and District Kinsmen 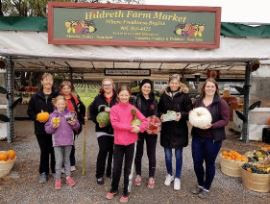 Over the past several years our club has sort of shuffled along. Zone and District obligations of some members coupled with natural attrition, meant we were just going through the motions, dropping in numbers and drifting with the tides. At the end June 2018, with a membership of only 4 active members, we decided we needed to take the wheel and once again chart our own course. We made a commitment to each other and those who went before us that we would focus on rebuilding our club and like the little engine that could we are gradually building steam.

Our first goal was to get back to routine. They say routine is important to wellbeing and success and that was apparent as we found ourselves adrift. Meetings weren’t static, we tried to accommodate everyone and some months not being able to agree on a date meant we just failed to meet. So we decided we needed to revert back to our previous meeting night. The meeting date would remain consistent and if you could make it great, but the bottom line was we needed consistency more than 100% attendance.
After all how do you invite someone to a group that has no stability?

Next we realized we needed to make our meetings someplace that you wanted to invite potential members to. Along with being static our meetings really hadn’t had any structure. In discussing what we wanted our meetings to be we decided to move back to a dinner meeting format. We’d tried other options, dessert and drinks, weekend meetings, someone’s home, even coffee shops, but we missed the fellowship that went with breaking bread together. We arranged for our meetings to be held at the Kinsmen’s club room and recruited their chef to cater our meal. We decided to further foster fellowship we would do a social event each month. We even went so far as to create a committee just to focus on those events. It doesn’t need to be costly, the idea is to do something fun together, enjoy each other’s company. Our first social; an afternoon of strolling the streets and cute boutiques of Niagara on the Lake followed by High Tea at the Prince of Wales hotel. We are thinking beer and bowling might be next…

We knew if we got them in the door we needed to have a meeting that would have them wanting to come back. First thing, we streamlined business; only what had to be addressed by the whole club got addressed by the whole club. Minutes are circulated a week in advance, treasurer’s report is available for perusal prior to dinner as is all correspondence. Committee reports if needed are kept to the two minute table topic idea. We wanted to focus on fellowship so we instituted an active fine session, and made sure each and everyone felt welcome and included. Then we took the most important step; we asked people to attend. People we knew would benefit from being part of our group and those who we thought would bring something valuable to the table. And they came…

In the day or two after our meeting we touched base with each and every one of our guests and thanked them for coming out adding that we hope to see them again. We sent them a reminder of our next meeting date and time and invited them to our next monthly social. We have three potential members that have already been to a second meeting and three more that will attend their second meeting next month. As we look ahead to our third general meeting of the year we have another two guests confirmed. Come January when our guests from October complete their 3 rd meeting and sign their membership forms we will have grown from a club of 4 to a club of 10.

We aren’t stopping there though, again like that little engine that could we are just building momentum, we are working on a membership plan that will see us do a more comprehensive membership drive. Who knows where we will be, come June 2019.


Thank you to our sponsors!